Newly released for 2014, there are five 5-Pan Eyeshadow Palettes, of which three appear to be vegan. The other two are Floral Values (purple) and Tunnel Vision (black and white).

As far as I can tell, this is a vegan product, but we won’t know for sure until Wet n Wild updates their vegan list (my more accurate list can be found here).

The packaging is the same as most of their other pressed powder powders—like the WNW Coloricon Blushers and Coloricon Eyeshadow Trios—albeit a little larger. The base is a shiny black plastic with a crystal plastic clamshell lid. It’s kind of difficult to open.

The eyeshadows look so pretty in the palette…

The pans are cutely arranged in a non-standard layout. The palette also includes two itty-bitty applicator brushes. I can’t tell if they are synthetic or of natural origin.

What I don’t like about the palette is the arrangement of colors. I think it makes more sense for the Browbone and Base shades to be switched. The Eyelid and Crease shades should likewise be switched.

Back of the Wet n Wild Coloricon 5-Pan Eyeshadow Palette

Each of the palettes has their function stamped into the powder, e.g. the crease shade is labeled with CREASE and the base is stamped as BASE. Of course you are free to mix up the colors as you want.

It feels like there is one too many shades in this palette, like we don’t need both the Base and the Browbone. It would be one thing if it was just a palette with a bunch of shades, but trying to cram all five shades at once onto your eyelid is overkill—especially when you can’t achieve any sort of definition.

The nice thing about Wet n Wild products is how well they are sealed. It’s very easy to spot if someone has tampered with the package.

For some reason, my palette was damaged. The Crease shade had broken off in some parts (not too surprising; accidents happen), but oddly, there was a strange plastic strand coming from the Base shade. Today I tried pulling it out and nearly wrecked the eyeshadow. The strand went right through the middle of the eyeshadow. It’s now all crumbly and broken. I feel like I need to buy another palette now.

Unfortunately, the formulation is the biggest problem with the palette. I’m not sure why Wet n Wild felt compelled to change their eyeshadow formula when the previous version used for the Coloricon Eyeshadow Trios was near perfect. Please note that the formula has changed to include macadamia derivatives.

The Base shade has the best formulation in the bunch. It’s creamy formulation is reminiscent of the WNW Eyeshadow Trios. The rest tend to be dry, dusty, and have zero pigmentation.

I tried to salvage the situation by using the palette wet, but that was an utter disaster. The shadows clumped up and were difficult to apply. I think the pigmentation for the Eyelid shade was worse than applying dry. I gave up partway through my endeavor.

There’s no way to salvage these eyeshadows.

The colors for 395A The Naked Truth look gorgeous in the pan, but the lack of pigmentation is a serious problem for the palette.

If you apply the shades as instructed, you don’t really see any contrast. Even with a large range between the Base and the Definer, you get a look that’s all muddy and undefined. It is really disappointing.

A creamy ivory shade. While it has the best consistency, it’s also the most boring.

A silvery, taupe nude shade. It has the third worst pigmentation, but I like to use it on the inner part of the eyelid for highlight.

A slightly shimmery taupe shade. By far, the worst pigmentation. You will get tons of fallout trying to apply enough shadow to be visible. Scratch that. You’ll get a lot of fallout in general trying to use this palette.

You can attempt to use this as an eyelid color, but it is by far the worst offender in terms of fallout. All of the glitter ends up in your brush and face, and none on the eyelid.

A standard, dark coffee brown. The most pigmented of the bunch and probably the shade you’ll use least.

Do I recommend this product? Not at all. The more I use the palette, the more irritated I become. I initially had a higher rating, but during the course of this review I lowered it from a B- to a C—and finally to a D (revised to 1 star). You buy this palette when you’re a vegan and there are no other options.

2/16/2015
I’ve heard on the internets that the 5 pan palettes are being reformulated for 2015. Since my drugstores tend to drag their feet when putting up new stock, I will wait awhile before repurchasing to ensure I get the new formula. Here’s hoping the palette will be much better once reformulated. 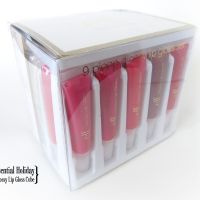